Why You Should Talk About Sex With Your Kids Every. Single. Day. 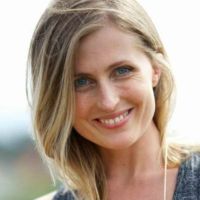 I learned the truth about where babies came from when I was 10 years old. Before that, I believed that babies happened when boys and girls mixed their urine together. As a result of this, I was terrified to use the toilet. Obviously the truth came as a great relief (literally).

My sex education consisted of my mother covertly placing a children’s book about reproduction on the end of my bed in a brown paper bag. That was all I had until I reached junior high and was forced to take Sex Ed as a unit of my health class, taught by our white-bearded gym teacher; he was basically Santa Claus in basketball shorts showing microscope slides of gonorrhea.

These days, most parents understand that a book in a paper bag does not count as sex education, but we’re often confused about what is the right age to have "The Talk" with kids.

Here’s the harsh truth: "The Talk" is not enough. One talk, even if it’s a good one, can’t adequately arm your kids with the information they need to navigate our complicated modern world in a healthy way.

Our kids need conversations about their bodies, sex, and sexuality to be a part of normal life, even when they’re as young as 2 years old. Here are five reasons why.

1. Kids learn best from repeated exposure to a subject.

They may remember the basics of what you said after one conversation, but that doesn’t mean they’ve fully processed the bigger picture of your message or figured out how they fit into it.

Imagine your child learning a tough new math concept in school, and then never discussing the concept again. That’d be absurd. So why do we think they can grasp the complicated biological and emotional aspects of sex after just one chat?

2. You get to practice talking about sex without being embarrassed.

Can you talk about penises and vaginas without blushing or cringing? Can you explain the difference between homosexual and heterosexual without stumbling over your words? If not, then you could probably use some practice.

If you talk to your toddler about their genitals while in the bath or during diaper changes, the words will lose their "cringe factor." That way when it’s time for the tougher conversations later on, you’ll have a solid foundation and lots of practice being calm, cool, and collected in the face of what others might find embarrassing.

If all else fails, or if you’re starting late, you can always practice these talks with your partner or a friend.

3. Talking about consent throughout your child’s life lays a foundation for healthy relationships later.

Judith Steinhart, a New York-based Sexologist and Sexual Health Educator, explains that teaching consent should start young with kids. She wants parents to feel empowered to say things like, "Your body is yours. You have the right to say 'no.' You don’t have to kiss any relative you don’t want to kiss. You can say, 'No, thank you.'"

"Talking about this is important, but so is demonstrating it," Steinhart explains. It’s important to sometimes say things to your child like, "Honey, please don’t hug me right now," and explaining why or asking them, "Would you like me to hug you?" and saying, "Okay, maybe later," if they say no.

4. Kids learn more from what we do than what we say.

If you’re telling your 6-year-old that babies come from storks rather than something simple and science-based, you’re starting your dialogue about sex dishonestly. Once you’ve sent your child the message that you’re untrustworthy or too uncomfortable to be a source of information about sex, they’re less likely to choose you as their primary source of information in the future.

Prove to them early on that you’re the one they can trust when it comes to these tough subjects. If you’ve already told them a fib about the birds and the bees, take the time to apologize, tell them the truth, and let them know you’re open to honest conversations whenever they want.

5. Talking about sex more often means more opportunities to talk to kids about your family’s values.

Whatever your values are, it’s important to seize opportunities to talk about sex and offer your perspective as often as possible. Marnie Goldenberg, a health consultant and sexual health educator who focuses on helping parents raise sexually intelligent kids, explains that some parents see our hyper-sexualized culture as a reason to avoid talking about sex. Goldenberg thinks this is a mistake:

"For all of the images a person believes to be negative, they have the opportunity to counter with two or three messages they believe to be positive. For example, if you think our media offers promiscuity as an ideal, you can reinforce concepts of intimacy, trust, and mutual respect, and the joy and love that sex provides to a primary relationship."

Here are seven ways parents can make sex education a part of their daily conversations.

1. Teach kids the correct names for their genitals.

Kids need to know the correct anatomical terms for their body parts, From their elbows to their vaginas.

2. Remind them about the importance of consent.

Teach them to ask their friends before hugs or rough-housing. Remind them that their body belongs to them, and that they can say “no” to anybody.

3. Talk about the sexy images they see around them.

If you notice your kids staring quizzically at a sexy billboard, ask them what they’re thinking and if they have questions. Talk about how every person has the choice of whether to show a lot of their bodies or to cover up, and remind older kids that how a person chooses to dress shouldn’t affect how much we respect them.

4. Point out great moments of consent and healthy sexuality in TV and movies when they arise.

Say something like, "I think it’s so cool how that guy just asked the girl he liked if she wanted to kiss him."

5. Discuss unhealthy relationships or sexual violations when they arise in TV and movies.

Discuss and deconstruct dangerous and problematic romantic and sexual interactions, and explain how your own values fit in. Old James Bond movies are ripe with opportunities to talk about objectification and violation of consent. Have your teens brainstorm the ways in which James Bond should’ve shown more respect.

6. When talking to older kids about sexual and romantic interactions, ask them questions and do some myth-busting if necessary.

You may find, when talking to middle school- and high school-aged kids, that while they think they know a lot about sex, love, and consent, they can be a little clueless. That’s okay; ask questions like, "How do you know when someone wants to kiss you?" or "How will you know when you’re ready for sex?" and, if necessary, gently challenge their assumptions.

7. When your child gets a phone or starts using social media, be very clear about how you expect him or her to handle sexts or nude photos.

Most of us grew up in a time before webcams and certainly before cell phone cameras, so the whole idea of kids sexting or sending sexy photos to one another is foreign to us. But it’s very common among young people, and they need to know how to handle it. Share you family’s values on the subject, and be clear what you expect your child to do if he/she receives a photo of another.

And remember, it’s okay if you’re behind on building a lifelong catalogue of “sex talks” with your kids. What matters is that you start now, in whatever way is age- appropriate for your child, and jump on opportunities to be honest and open with your kids. They’ll thank you for it someday.

"Why You Should Talk About Sex with Your Kids. Every. Single. Day." by Joanna Schroeder originally appeared on Babble.com, and was reprinted with permission.

Joanna Schroeder is a feminist mother, wife, and writer. Her work has appeared on outlets such as Redbook, Time.com, AskMen, and MariaShriver.com, and she just finished her first novel. She and her husband are mountain biking enthusiasts raising very active sons. Follow her shenanigans on Twitter.