5 Tips For Talking To Your LGBTQ Child About Sexual Health 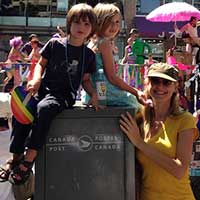 The following article was originally published on The Parents Project, a first-of-its-kind digital space for parents, teachers, and caretakers of LGBTQIA young people, and cross-posted here with permission.

A number of years ago, I was at a conference where I gave a presentation on the challenges LGBT+ kids face accessing accurate information online.  After the presentation, a woman approached me.

She was a nurse and there professionally, but the reason she wanted to talk was that her 14-year-old son had just come out as gay, and she was terrified that he was now at greater risk for HIV.

This mom explained that she felt ill equipped to talk to her son about sex given his revelation. She was struggling with how to offer support, get him needed information, and do so without making the whole experience super uncomfortable.

I was thinking back on this conversation recently, since while the issue of how to talk to our kids about sex can be a complicated one for everyone, for parents of queer youth, doing so can raise some additional issues.

So, here are 5 things parents of LGBT teens can keep in mind when gearing up for the sex talk.

1) Don’t Assume a Teen’s Sexual Orientation or Gender Identity Is Just About “Sex.”

A lot of people confuse sexual orientation and gender identity with sexual activity. Yet for plenty of queer kids, this is more related to identity and community than it is to sexual behavior.  Still many people default to focusing on the sex side.

And while sex will likely be a part of your child’s life at some point, and one that is probably going to be colored by their sexual orientation or gender identity, if that kid is on the younger side, it is very possible that sex with another person won’t be on the table for a while.

Having a conversation where you acknowledge the vast range of ways to express sexual orientation and gender that doesn’t only focus on sex acts can send a positive message about your views of your child’s relationship to this aspect of who they are.

2) Talk About Specific Sex Acts, Not About Lesbian or Gay Sex

Plus, for a whole host of reasons, lesbian, gay and bisexual teens are actually have a greater likelihood for teen pregnancy than youth in the general population. Because of this, discussing birth control, including emergency contraception, is crucial. But since we often assume that a queer kid is not having the kind of sex that could result in a pregnancy, this element of the conversation is too often overlooked.

When talking to trans teens, it is also important  to both respect their gender identities, and also to acknowledge the reality of the bodies they have. For example, for some trans boys this will mean conversations about periods and gynecological care.

When we term sex itself as “gay” or “lesbian” we rely on stereotypes of what we imagine these encounters to look like and a lot of useful information can get lost in the process.

3) Be Prepared to Counter Some Misinformation

In schools across the United States, if students get sex ed at all, it is often of the abstinence-only variety. This form of education leaves out crucial information and is notoriously homophobic and transphobic.

Curricula may vastly overstate the risk of acquiring HIV for gay teens. Or they might talk about how being gay will lead to depression and suicide without addressing the fact that these correlations are related to lacking support, being forced to hide one’s identity in the face of hostility, and being rejected by school and family, and are not directly the result of someone’s sexual orientation or gender identity.

It’s not that LGBT+ teens don’t have any access to sexual information, but so often that info is just way off the mark, and as parents you have the power to correct this.

4) Don’t make the sex talk a one time thing.

A lot of parents gird themselves for a sex talk that they expect will be an awkward exchange ending with the offer that, “You can come to me with any questions.” That’s often something both parties know is unlikely to happen.

And while this scenario plays out all the time, it doesn’t have to. One of the best ways to prevent such a situation is to make sure that the sex talk is an ongoing conversation, not a one time thing.

Speaking of those conversations, you can let your child know if sex is hard for you to talk about, and say something like, “Look, I’m not an expert and I’m not used to talking about this, so I may mess up a bit.”  A lot of parents never had these conversations when they were growing up and have to learn on the fly. Letting your kids know this is one easy way to level the playing field a bit.

Having a sex talk can be nerve wracking if you don’t know the answers to a child’s question. You can always offer to look something up that you don’t know.  But if you want to do some advance research, you can check out this list of 32 common sex questions from queer youth on the LGBT+ Teens site that I ran for years.

It would also be helpful to read up on some basic sex ed.  Al Vernacchio’s For Goodness Sex: Changing the Way We Talk to Teens About Sexuality, Values, and Health is a great place to start. Vernacchio, who is gay himself, is a teacher, writer, and speaker and has a lot of good insight!

The more prepared you are, the more comfortable you will ultimately be having this conversation with your child.

What it All Comes Down to

Though talking about sex can seem terrifying, it can also be a lot easier than parents think.  And once you arm yourself with a little knowledge, doing so can not only be a great way to help your kids stay safe and healthy, but it can also be a way for you to connect with them and offer support around an issue that can be a real struggle for LGBT+ youth.

Ellen Kate is a health educator, sometime writer, and mom. She runs a middle and high school health education program in Brooklyn, teaches in the Health Education department at Brooklyn College, and is a contributing writer for Everyday Feminism. For many years she edited About.com’s LGBT teens site. More of her work can be found here. Follow her on Twitter @ellenkatef